She is usually submissive to men but her will is absolute when angered. She becomes very kind and calm when around Well. She allows Well to do pretty much anything except things of the perverted nature and is the only member of the harem to refuse more intimate actions than kissing prior to marriage.

Although she says she is fine with other women around Well, she seems to make a habit out of getting into a dominant position over any new woman as soon as she appears.

At some point in her life, She gained the title of a saint because of her talent in healing and her deeds as a healer in the royal capital.

After Well defeats the skeleton dragon, her grandfather gains permission from the king to marry her to Well.

Her talent and deeds as a healer in the royal capital earned her the title of "Saint". But although her mana is comparable to the rest of the mages in the harem, she is only capable of using Holy attribute healing magic and purification.

Their marriage was political, in hopes of creating a safe relationship between the church and the Baumeister family. Because of their achievements, Elise (saint) and Well (dragon slayer), they have a unique relationship and understand each other deeply. According to her, she says that Well is the first person to understand her true feelings. She sees him as a completely different person, more like a gracious man instead of somebody that says calls him a monster. She is the first person to see this side of him.

Well is very caring and sometimes overprotective toward her, to the point that, he willingly gets involved in her affairs, to ensure her safety. The other party members sometimes get off being jealous of her. 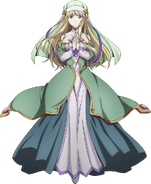 Add a photo to this gallery

Retrieved from "https://hachinan-tte-sore-wa-nai-deshou.fandom.com/wiki/Elise_Katharina_von_Hohenheim?oldid=1650"
Community content is available under CC-BY-SA unless otherwise noted.