Iina has long red hair in a ponytail and purple eyes. She wears a white cloth outfit with a leather girdle and boots.

Iina can be selfish as well as act like a tomboy.

Iina's family has overseen the management of a spear dojo for generations. The family was appointed vassals by Lord Margrave Braihiraider. Since she's the 3rd daughter of her family it would be hard for her to marry so she earns her keep in the world she aims to become an adventurer.

She was born with just enough mana to be able to use physical reinforcement magic, which in turn allowed her to beat her father and all her elder brothers while having less skill than they do. Something which she is hated for and is kicked out of the family for. 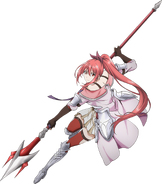 Add a photo to this gallery
Retrieved from "https://hachinan-tte-sore-wa-nai-deshou.fandom.com/wiki/Iina_Suzane_Hirenbrant?oldid=1672"
Community content is available under CC-BY-SA unless otherwise noted.