Louise is a young girl with chin/neck-length blue hair and ocean blue eyes. She is also one of the shortest girls in the story even after the time skip. Her facial features and expressions give her a sort of chipmunk-like appearance overall.

Louise is very energetic. She's also obsessed with becoming Bell's wife. Louise tries to make it through any difficult situation she gets herself in so she can live to see her wedding day.

She was born into a family that teaches a martial art capable of converting Mana directly into physical prowess. Due to her excessive mana capacity compared to those around her, she was kicked out of the family and aimed to become an adventurer.

Her mana capacity is comparable to Armstrong and is capable of using the same close quarter physical techniques he is. 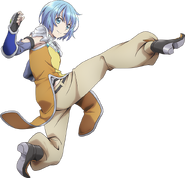 Add a photo to this gallery
Retrieved from "https://hachinan-tte-sore-wa-nai-deshou.fandom.com/wiki/Louise_Yorande_Aorelia_Oufelbeik?oldid=1581"
Community content is available under CC-BY-SA unless otherwise noted.